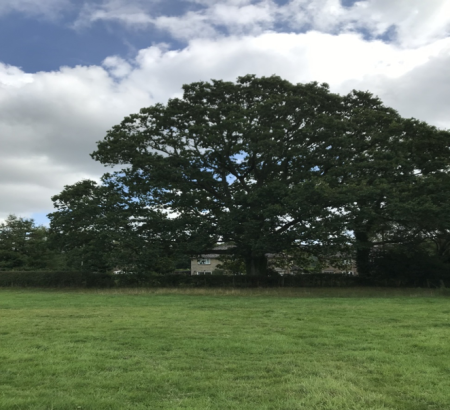 Nigel Scott of Cannons Farm, Barrow Lane has started a petition to show the villages objection to the planning application to build a house on the piece of land opposite St John's Cottages, Barrow Lane, containing a 300 year old oak tree, with a Tree Preservation Order on it.
The application will be reviewed by South Somerset District Council's Area East Committee on Wednesday 3rd June.
Following the Parish Council's rejection of the application, Nigel and other residents of Barrow Lane would like the District Council to know how the residents of Charlton Musgrove feel about application and the threat to this ancient and magnificent tree with a TPO on it, ahead of them reviewing the application.
Here is a link to the petition:
http://chng.it/RVSshWL4

This large 300 year old Oak along Barrow Lane is the only tree in Charlton Musgrove apart from a single Yew to have a TPO (Tree Preservation Order).

Previous attempts to acquire planning permission on the small strip of land on which it sits on the border have been refused on the grounds that any building here would be harmful to the tree’s root system.

A new application has recently been received by South Somerset District Council for an erection of a dwelling on the north end of the site (Application No 19/01976/FUL). The plans show a protection area around the oak of a circle of a 10-12 metre radius. However most experts including the Association of British Insurers would recommend a radius of 20-30 metres for a tree of this size and antiquity. If this was applied then it would encroach over the building outline. In addition, no details of landscape design have been submitted and nor has the technical detail on the earthworks associated with the sewage connection been included in the application.

Near neighbours are objecting to this application mainly on the basis of the danger to the tree. As this tree enjoys a unique status within the village and should be viewed as a community asset to be retained and enjoyed by this generation and generations to come, the continued health of this asset is rightly a concern of the whole village.

The plans can be viewed on the SSDC Website or by request to the Parish Clerk Sheran Ring. Observations and comments can made directly to the Planning Authority(SSDC) or the Parish Council.

ALL EVENTS ARE CANCELLED DUE TO CORONA VIRUS

Every Wednesday and Thursday morning at CMMH