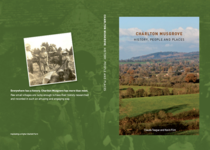 All villages have a history, Charlton Musgrove has more than most.  Few are lucky enough to have it written down in such an amusing way

The village book : Charlton Musgrove, History, People and Places was launched in 2011.  This highly professionally produced book was researched and written by Claude Teague and Kevin Flint with photographs by Tony Cole.  This collection of memories is a great read.

Further information can be obtained from Kevin Flint at  kevandlizflint@aol.com

Charlton Musgrove is first mentioned in the Domesday Book of 1069.  The medieval village was originally near St Stephen's Church in Rectory Lane.  The bubonic plague came to the village in 1553.  Licences to build cottages at Barrow and later at Southmarsh were granted in the 17th century.  In the late 18th and early 19th century the cottage settlement expanded in both areas and Barrow has remained the centre of the population.  Over the two centuries since the first census of 1801 the population of the village has remained remarkably stable at between 350 and 490 people.

In the early 20th century there were several beer houses in the village where people brewed their own beer and served the locals.  Cider was also made.  There was also a a baker, a butcher, a brick and tile maker, a wheelwright, a shoemaker, a cheesemaker and a malthouse, not to mention a poor house.

After the Second World War Charlton Musgrove was still a village of small holdings and farms, and they were the main employers.  In the 1960's many villagers were employed in the Cow and Gate factory in Wincanton.  The factory collected the milk daily from 33 small milk producing farms in the village.  After the 1970's many small farms were sold and amalgamated into larger farms.  Today just three large dairy farms with herds of 200 cows or more remain in the village.

In 1818 there were both day and Sunday schools supported by voluntary contributions.  The village school closed in the early 1960's and pupils transferred to Wincanton Council School.  In 1965 the village also had a cricket club, a WI, a Post Office and a village shop.

Horse races were held near Wincanton in 1765 but not regularly until the 1890's when they were held on the course at Hatherleigh.  In 1893 Grand National rules were adopted and it became the setting of the earliest steeeplechases ever held in the 19th century, before even Cheltenham and Aylesbury.  When the lease of the Hatherleigh course expired in 1925 the company purchased Kingwell Farm in Charlton Musgrove and the first race took place in 1927 at the new racecourse.  During the Second World War it was commandeered by the military authorities.  Today Wincanton races draw very large crowds.

ALL EVENTS ARE CANCELLED DUE TO CORONA VIRUS

to be hold via Zoom

Every Wednesday and Thursday morning at CMMH